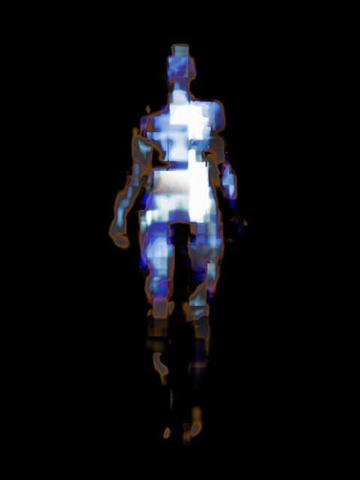 Levántate (Rise) is an intimate installation that invites the visitor to a metaphysical meditation. As the visitor enters the dark room, he is encountered with a ghostly view of a human body being projected horizontally from the ceiling. A white sculpture in the shape of a sarcophagus operates as a screen where the winkling image of a reclining body in a continuos process of digital rotting is reflected. The iconography of the visualized woman body refers to those technological methods of diagnosis used to allow a scientific vision of the human body or to the images obtained from thermodynamic energy fields. The audio component of the installation is an algorithmic musical composition under constant transformation consisting of voices digitally decomposed. A microphone placed in the room records the whispers and sounds generated by the visitors contemplating the installation. These verbal resonances are recycled through an interactive system of accoustic feedback, being in this way incorporated both into the musical composition of the installation and into the projected image. All technologies seem to hold inside a secret desire for inmortality. Clonation, genetical engineering and life assisted medical technologies are good examples of how the precise limits between life and death are being blurred. With Levántate, Mariela Cádiz and Kent Clelland have created a suggestive reflection on the vanishing of these limits. While watching the installation, the public surround the sarcophagus like participants in a ritual. The name of the installation, Levántate, obviously refers to the biblical episode of Lazar’s ressurrection, only that this time it is a technological miracle.